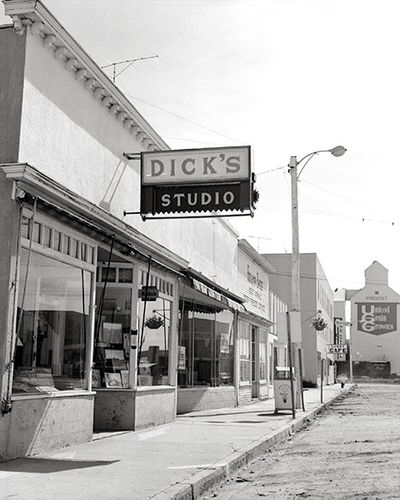 The youngest son of an avid photographer and banker, Dirk Sr. emigrated from Holland to Canada in 1959. With suitcase in hand and an Agricultural College Degree in pocket, Dirk (or Dick as most locals call him) started a three year stint working on a Saskatchewan farm. During the winter evenings he studied photography and did black and white darkroom work. Continuing to move forward with his father’s passion of photography - Dirk Sr. started Dick’s Studio Ltd. in Provost in November of 1962 and married Elaine in 1968. In the following years, Dirk and Elaine attended many photographic seminars and entered numerous print competitions (Provincial, National and International) in an effort to hone their skills. Eventually both were awarded their “Craftsman of the Photographic Arts” status from the Professional Phototgraphers of Canada and in 1983 and 1985 respectively, they received their “Master of Photographic Arts” status. This was followed by Dirk achieving the same distinction from the Professional Photographers of America in the mid-nineties.

Dirk and Elaine have two children: Heidi who with her husband and children live in Calgary - and Dirk Jr. who with his wife Stacy, son Darian and daughter McKenna reside in Provost. After taking two years of Economics at the University of Alberta and then switching to the NAIT Photography program, Dirk Jr. followed in his Father’s footsteps by becoming a third generation photographer. Since joining the family business in 1992, Dirk Jr. has proceeded to take over ownership of Dick’s Studio Ltd./Dirk Brouwer Photography. Dirk Jr. has also won several photographic awards, is accredited in children, wedding and several portrait classes, and has worked towards becoming a certified national print judge. He obtained his“Craftsman of Photographic Arts” status in 1998 and his “Master of Photographic Arts” distinction in 2001. All this to insure that Dirk Brouwer Photography continues for many more years to come.

In 2013, Dirk Brouwer Photography was awarded "Best Group Portrait" at the PPOC-Alberta provincial print salon, as well as receiving the same award at the Professional Photographer of Canada national print salon.

Elaine was born and raised in Macklin, Saskatchewan. She married Dick in 1968 and has been a part of the business ever since. She received her Master of Photographic Arts from the Professional Photographers of Canada in 1985.

Joined the family business in 1992. He received his Master of Photographic Arts from the Professional Photographers of Canada in 2001.